Please note that this book is no longer available in the market due to the fact that the cooperation betwen Dr. Ioannis Vasileiou and the publishing house Historical Quest has ceased.

The European Union budget is the “backbone” and the driving force for all policies, programmes and strategies. Both its setting-up and allocation directly influence the Union’s general directions and targets. Numerous conversations have so far taken place regarding the rationality of budget allocation.

The importance of a correct allocation exactly where needed is huge, especially these days, which are characterized by intense economic and political uncertainty. The target of this book is to explain (in a simple manner) to the reader the main aspects related to the setting-up and allocation of the European Union budget.

Through this book, the author is optimistic that he will offer the reader the chance to critically delve into the subject and draw his personal conclusions regarding the rationality of this allocation.

Apart from the introduction, this book consists of four chapters. In Chapter 1, we critically present “A Brief Historical Overview” and analyze the main political events and the most important changes that influenced the EU budget from the 1960s onwards.

In Chapter 2, the author focuses on the “Setting-up and Magnitude of the European Union Budget”. His aim is for the reader to precisely understand how the budget is being set-up, its importance, and its specific particularities. Furthermore, the author believes that it is necessary to clarify some pivotal terms about the budget, such as the Multiannual Financial Framework, the “own resources” and the concept of “discharge”.

In Chapter 3, there is a thorough analysis of the “Allocation of the European Union Budget”, which is considered to be an extremely important issue nowadays. Apart from the presentation of detailed data regarding the allocation, special emphasis is placed on some of the most important programmes and instruments being financed by the Union budget, such as “Horizon 2020”, the Connecting Europe Facility, Erasmus+, the Youth Employment Initiative, LIFE, COSME, the Development Cooperation Instrument, the European Neighborhood Instrument, the Instrument for Pre-Accession Assistance, the Business Development Centre at the Letterkenny Institute of Technology, the European Progress Microfinance Facility, the joint EU and Unicef project, RAPEX, MEDIA, the Asylum, Migration and Integration Fund and the Internal Security Fund.

In Chapter 4, we draw the main “Concluding Remarks” and summarize all evolutions in terms of EU policies and activities in the context of the budget so far. We estimate the degree of success up to now and present some future prospects.

In any case, we must emphasize the fact that the current instability probably prohibits any long-term predictions, which the author intentionally avoids. Time is always the only (and relentless) judge, but this does not recant the fact that EU has already achieved a very satisfactory allocation of its budget to the sectors where (in general acknowledgement) it is necessary. 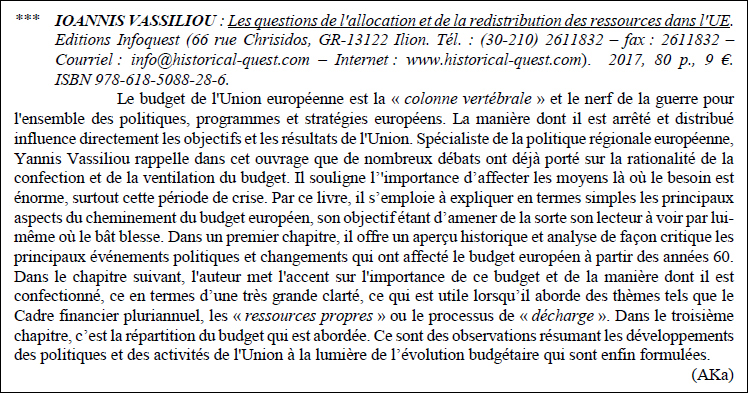